Functions are an integral part of modern programming languages. In OOP they are called methods in a functional world their name is functions as you may guess. I’ve already published multiple articles about Scala functions. In this post I want to speak exactly about recursive functions.

Let’s start from the definition. A recursive function is a function which calls itself. That’s why it’s important to have some condition for stop. Of course if you don’t want to create an infinite loop.

Recursion could be applied to many common problems, which you are used to solve with help of regular loops for and while. For example how to calculate sum of numbers between two numbers? We create an array of all elements and then iterate through it, adding all elements.

The same result can be achieved with help of recursive function:

As you see we return expression a + recursiveSum(a+1, b) until all elements would be added.

The second one approach is more concise but it has a point of risk – java.lang.StackOverflowError. Since recursion is interpreted by JVM as a regular Java method invocation, it implies usage of one additional frame in the stack per a recursive call. Hence if the number of recursive calls exceed the limit of stack, the StackOverflow error occur.

Read about the structure of the Java Virtual Machine for more details about stacks and frames.

Thank to Scala tail recursion optimization we don’t fear the exception StackOverflowError, because on JVM level this code interprets as a regular loop.

So a tail recursion in Scala is more efficient than a regular recursion. In order to confirm this, I’d like to demonstrate a function which calculates greatest common divisor. Of course I’ll use a tail recursion:

Try to illustrate each step of the execution for yourself in order to understand how it works. 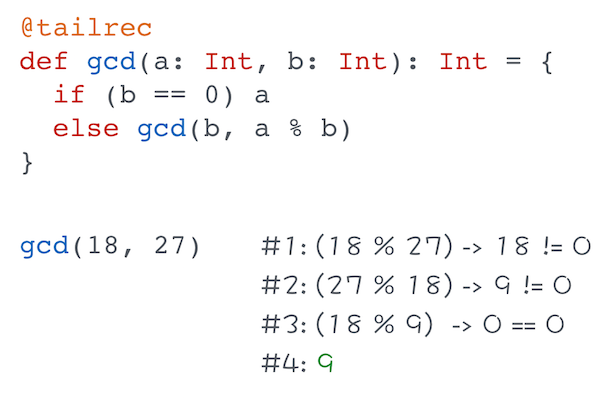